The Buddhist and Hindu culture are flooded with rich art in more ways than one person could imagine. In the mind of a young Westerner the term art could mean an array of things, but may only bring up a narrow perception. The Western culture is not centered on symbolism, deep meaning, self-expression, or any of the beauty that is art. But, what is art? Where does art come from? Who says that one thing is a piece of art and the other isn’t? Does the meaning of art come from the outside, in our history of what people, places, and things have titled art as, or does the interpretation of art come from within, in whatever way we wish it to be?

The Webster’s dictionary defines art as “the expression or application of human creative skill and imagination, typically in a visual form such as painting or sculpture, producing works to be appreciated primarily for their beauty or emotional power”.If asked to give an example of art, the same young westerner may mention paintings that hang in museums or statues that they are told about or see in textbooks. Now, these examples do indeed depict art, but only depict a very small possibility of art and what art could be.
Art does not just have to be pretty colors formed in a way that “looks good”. Art does not just have to be straight lines that form shapes of different sizes. Art does not just have to be the strenuous and tedious application of technique after technique. Art does not have to be any-thing, in fact art is not any-thing. Art is an adventure of mind, spirit, and emotion. Art is about taking yourself and your being somewhere that no one else but you can experience, and the beauty in that is that you are able to share in and express that art to the world in an infinite amount of ways, with each way having it’s own unique signature of your being.

The Buddhist and Hindu culture have taken art to the next level, a level so beyond what a ‘typical’ person would be aware of. These cultures and their art includes but is not limited to Ritual Objects, Symbolism and Pictures, Body Gestures and Symbols, Symbolism and Ritual Objects, and Deities. It is fascinating to realize when observing a piece of art from the Eastern world is that one piece may include all of these things combined.

Tibetan Buddhism, especially, is home to an iconography that is both stunning to the eye and puzzling to the mind. Specifically, we will be discussing a rather enigmatic aspect of Tibetan Buddhism. That aspect is of the ferocious and terrifying forms known as the wrathful deities. The wrathful deities personify the tremendous effort that it requires to overcome ‘evil’ in this world. They are benevolent gods who vanquish this evil, the violence and chaos that is a fundamental reality of the cosmos, and protect the human mind. In Sanskrit, the wrathful deities are known as darmapalas (Image 0), which means “defender of the dharma”.

These wrathful deities can be found all over the Tibetan Buddhist culture. The worship of these deities began in the 8th century by the magician-saint Padmasambhava (Image 1). It is said that Padmasambhava conquered the malevolent deities in Tibet and forced them to vow to protect Buddhists and the Buddhist faith.

Padmasambhava introduced the people of Tibet to the practice of Tantric Buddhism. He is regarded as the founder of the Nyingma tradition, the oldest of the four major schools of Tibetan Buddhism. Padmasambhava (Image 1 and 2) is generally depicted as wrathful but smiling, with one face and two hands, and a magnificent aura; the rest of the painting is filled with rich symbolism. His complexion is white with a tinge of red and his eyes are wide open in a piercing gaze. On his head he wears a five-petalled lotus hat which contains three points symbolizing the three kayas. These are the three bodies of Buddha’s being or enlightenment. Dharmakaya corresponds with one’s mind, Sambhogakaya with one’s speech, and Nirmanakaya with one’s body. Dharmakaya is the formless body. 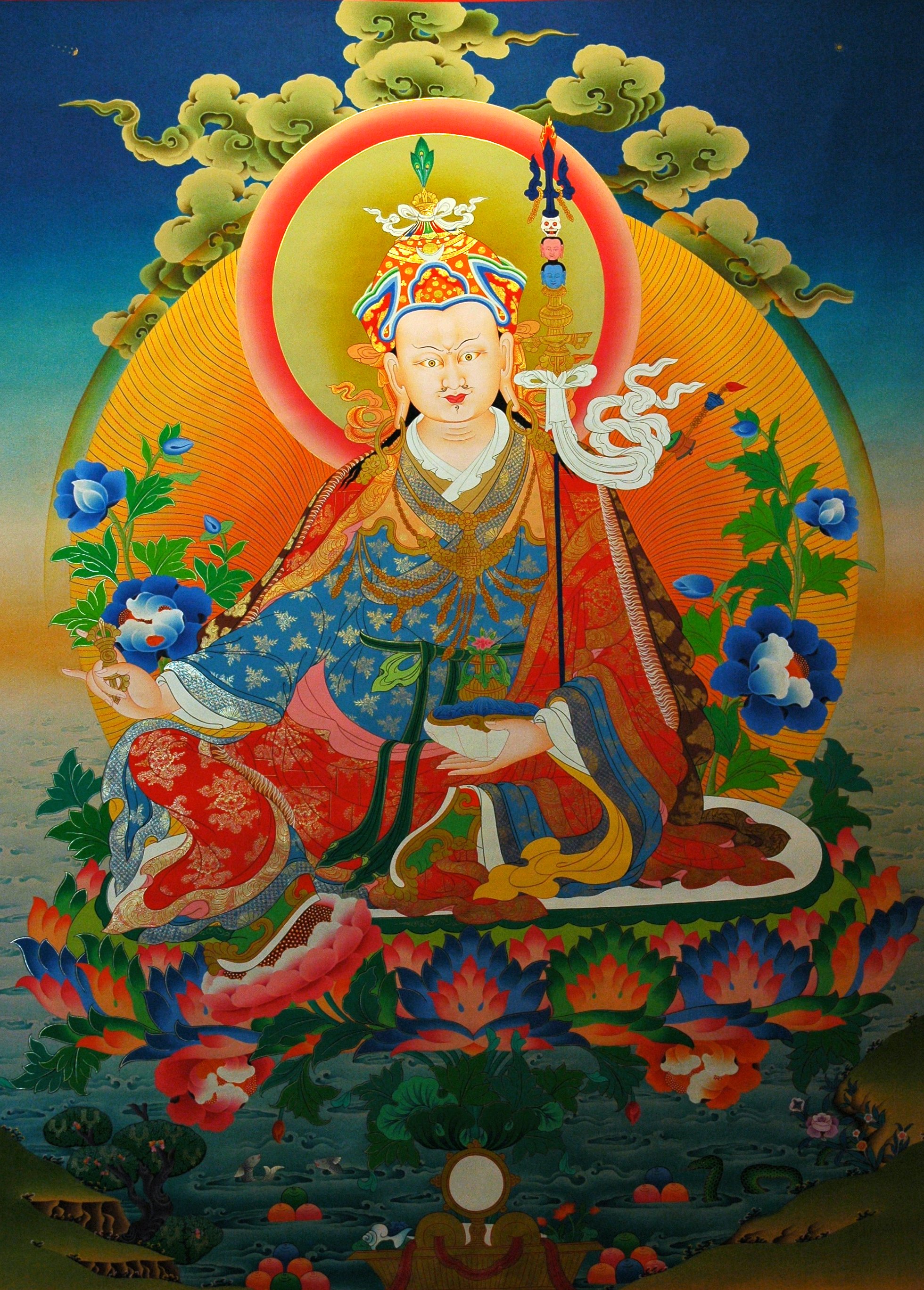 His head also contains a sun and moon symbolizing skillful means and wisdom, a vajra top to symbolize unshakeable Samadhi, or mental concentration. Atop his head also sits a vulture’s feather that represents the realization of the highest view. In Image 2 Podmasambhava wears, in layers, a white vajra undergarment with a red robe, a dark blue tunic of a mantra practitioner, a red and yellow monastic shawl decorated with a golden flower pattern, and a maroon cloak.    In his right hand he holds a five-pronged vajra at his heart and his left rests in the “Gesture of Equanimity” with a skill cup brimming with nectar sitting on top.

Padmasambhava is said to have taken eight forms or manifestations; some being in pacifying and wrathful forms. Images and depictions of the wrathful forms of deities can be found in the homes and temples of Tibetan Buddhists all around the world. These images act as protection for the owner of the home and remind them of their duty to overcome ‘evil’ within themselves, and thus rid it from the Earth. In general Buddhist practices sculptress and thangkas are used not just aesthetic objects to be hung and placed about for decoration, but actual temporary dwellings places for the energies that these spiritual beings posses and emanate. A Buddhist practitioner would then harness the power of those energies and direct them toward the Buddhist’s goal. These deities, although benevolent, are represented as hideous and ferocious in order to instill terror in evil spirits, which threaten the dharma.

In the city of Pashupatinath, Patan stands a rather large statue of a wrathful diety (Image 2), possibly one of the wrathful aspects of Padmasambhava . People from all over the world come to this statue to make offerings as well as sacrifices to this deity for protection and the overcoming of evil. The whole structure stands at about 22 feet tall and about 20 feet wide in a rectangular prism shape built out of bricks. Before stepping onto the structure itself one encounters two dog like forms which are built out of stone and each have their own offering bowl beside them.

Surrounding the deity from the outside in are three layers that arch about him. The first is all black, about a foot in width and depicts a terrifying face with two bulging eyes and an open mouth with two sharp teeth. The face has two arms protruding from it sides both holding a snake. The snake is coiling around vines that are holding up two peaceful deities with certain mudras.   The next layer is half as thick as the outermost and acts as the aura of the deity. In most Buddhist depictions of deities one may find a beautiful and shining aura about him/her, but in the case of the wrathful deity one sees that it is made of pure raging flames. The flames begin as a dark blood red and stretch out to a vibrant orange and are carved in very intricate and an almost rhythmic fashion.

Next we turn our attention to the bottom of the deity under it’s feet to see it standing on a body or carcass. The carcass is colored in a blood red and seems to have been destroyed by the deity. The deity is depicted in the center of the structure as an all black form with six arms. As if lying upon the shoulders of the deity, there lies a lifeless face of a male figure with it’s arm being held in the upper left hand. In the middle left arm the deity is shown holding three severed heads by the hair. One may easily mistake these images of people as just normal every person’s being killed and mutilated, however with proper knowledge one would understand that these beings are the demons of ignorance and ‘evil’. In the upper right arm of the deity we see a sword being swung above its head as well as another weapon in it’s middle right arm The double edged sword is all black with a white border along with a gold spiked handle with a red sash hanging from it. These weapons are used to destroy the ignorance brought on by the energies of these demons.

The final two arms are seen in the center of the deity right at chest/shoulder level. The right hand seems to be in the “Gesture Beyond Misery”. In this mudra the right hand is lifted in line with the shoulder. The wrist bends backwards and the fingers and the palm face upward and away from the body. Also called the ascetic Gesture of Renunciation, it could be that this wrathful deity is expressing the need to renounce ignorance. The deities’ left hand can be seen in the “Gesture of Discord” in which the thumb and third finger touch the tips forming a circle. The interpretation of this could express that these demons that one needs to be protected from create and bring with them nothing but discord for the mind.

The deity is also shown wearing a beautiful headdress depicted with gold and many jewels. The headdress is lined with five gold discs with alternating red and green jewels in their centers. Under the discs is a golden lining that depicts four white skulls and a fifth carving of the head of a deity, the deity in the center sits underneath the red-jeweled disc above it.  The face of the deity is wide and is painted with red war paint and contains three eyes, all black, with the third sitting in the center of the forehead. Wrapped around the waist and neck of the deity is a sash/belt lined with more heads of demons. Around the neck of the deity lies a long snake curled up and around its own tail.

The art of Hindu and Buddhist traditions always have been rich with symbolism. What I adore about the art is that it requires the observer to look past the superficial and what seems obvious. The art itself is a tool for meditation and further contemplation and helps us to break out of our preconceived notions of right and wrong, good and evil, and more towards a universal outlook that transcends duality.

Karma Triyana Dharmachakra — Tibetan Buddhism — Cultivating Insight into the Nature of Things as They Are — The Three Kayas: The Bodies of the Buddha. (2010). Retrieved from http://www.kagyu.org/kagyulineage/buddhism/cul/cul02.php